The Webby Awards: Excellence In Application Scalability and Performance

Area 17, an interactive agency with offices in New York and Paris, built The Webby Awards’ “People’s Voice” web application and deployed it on Engine Yard. This is a case study of the application’s deployment and performance since its public debut.

"We needed a platform that would allow us to deploy quickly, scale without downtime, and push enhancements on a regular basis without any service interruption. Engine Yard delivered on every requirement. The Engine Yard Professional Services team provided advice and support through the entire setup process and allowed us to be confident that both the application and its infrastructure were going to hold under traffic. The entire team at Engine Yard were responsive, professional and continued to prove themselves as experts in their field."

Area 17 needed to deploy The People’s Voice application in such a way that it would be immediately scalable at launch. They expected a large surge of traffic at launch, and the possibility of traffic spiking rapidly and repeatedly throughout the voting period.

This led them to use Engine Yard due to the ease with which a cluster can be horizontally scaled for added throughput.

The People’s Voice application is a Ruby on Rails application running Ruby 1.9.3 and PostgreSQL 9.2 using ActiveRecord. The team used rspec along with rspec-rails to develop the ain standard TDD fashion. The application uses the underlying PostgreSQL database efficiently. The operations which conduct reads or writes against the database are rebuilding cache, registering votes inside a transaction and authentication. The application runs on Nginx, which forwards requests into a Unix socket where Unicorn application workers process it.

Environment setup: The People’s Voice application was first deployed to Engine Yard in a staging environment consisting of 3 High CMedium instances: application and database master instances and an Elasticsearch utility instance for search index and aggregation. This allowed Area 17 to test their deployments, future releases and custom chef recipes on Engine Yard prior to production.

From staging to production: The initial deployment into staging took approximately one hour, including data import. Shortly thereafter, Area 17 personnel stood up a production cluster, deployed the application and imported data into production. Total time to deploy: Just under two hours. 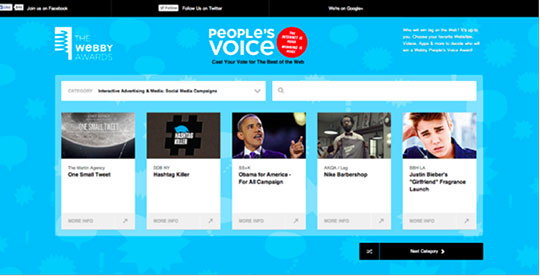 Gra2: Database master low Cutilization due to intelligent use of caching

The People’s Voice application performs reliably on Engine Yard due to its intelligent use of caching and overall solid build. The application was deployed relatively quickly thanks to Area 17’s experience with the platform and clever architecture design by Engine Yard.

"I want to thank Engine Yard for our partnership this year on The Webby People’s Voice campaign. The site launch went more smoothly than it has ever gone before and remained stable throughout the campaign. We’ve historically had trouble managing the stability of the site and this year we could not have asked for more. You know you need to batten down the hatches when a @JustinBieber tweet sends 67,000 users your way—but the site didn’t even flinch thanks to you guys.