The 2014 Super Bowl drew a record 115.5 million viewers, the largest audience to watch the game in the history of the sport, and also in the history of television. So if you're going to run a massive splash campaign across a number of social media outlets with an accompanying major Super Bowl ad, you'd better be on your game.

This was exactly the task facing Robert Dilio, CEO of Ideation. He started working with Twitter and digital agencies, Mindshare and Edelman Digital to help Unilever create one of the best interactive campaigns of the year. The goal was to launch Axe Peace, a new deodorant product from Unilever, at Super Bowl 2014. The campaign became known as Kiss For Peace.

Ideation is a an innovation and development lab, located in New York City, which helps clients invent products and campaigns to reach consumers with engaging, socially powered experiences. They chose to deploy their Related Noise platform on Engine Yard, as the backbone for the Kiss For Peace campaign during the Super Bowl. This case study covers the setup, performance and results.

During the Kiss For Peace campaign, people were asked to tweet a picture of themselves kissing and include the hashtag #KissForPeace on Twitter. Their picture was displayed on two of the most recognizable Times Square digital billboards. Then, a photo was taken of their picture on the billboard and tweeted back to them.

This application had to integrate with a number of online and real-world multimedia services. It not only had to gather every post and photo submission on Twitter with #KissForPeace in real-time, but then it had to process all of that data, talk directly with the Reuters and NASDAQ billboards in Times Square, take a picture of the photo submissions on the billboard, and then send that picture back to the original person who had tweeted it. The application required a high performance and reliable platform, ensuring fast response times, to drive a successful marketing campaign for a major brand’s new product.

Ideation used their Related Noise platform to bring this creative multimedia idea to life and made it perform flawlessly on Super Bowl Sunday by relying on the Engine Yard platform to deliver the required scalability and reliability. They also leveraged the expertise of the Engine Yard support team to build the best environment for their Related Noise platform (created by Ideation to gather data for their social media campaigns) and Kiss For Peace application. 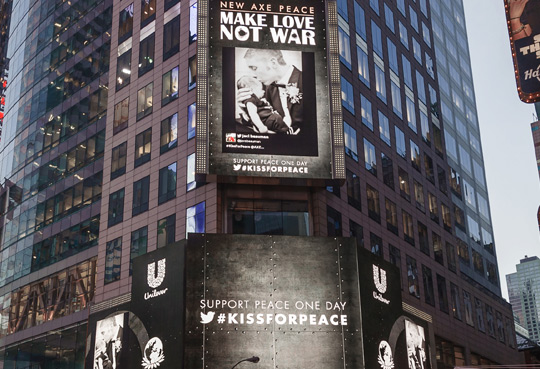 Kiss For Peace Campaign running on Times Square billboards during the 2014 Super Bowl.

The Related Noise social content management system was built on Ruby 1.9.3 and Rails 3, a language and framework that Ideation believes is both time-tested and battle worthy. The database was handled by MySQL with Redis for caching and real-time push notifications. The application stack on the Engine Yard side was stable_v4, on the latest updated stack release.

Related Noise was created by Ideation as a social content management system to create rich socially powered experiences for brands. Related Noise “listens” to conversations on major social networks, and scrapes all related data from the social network’s APIs through robust social listeners. It was key to the digital component of the campaign’s success during the Super Bowl, collecting and curating all #KissForPeace content, managing the real-time connection between twelve digital billboards in Times Square, and providing key analytical data to understand reach and engagement. Related Noise was the glue that tied all the different pieces of the digital campaign together, allowing everything to work seamlessly on game day.

In terms of compute resources, it was extremely important for Ideation to have an overall environment that could handle the massive splash traffic before going into the Super Bowl. In the past, Ideation had done extensive load testing with the Engine Yard support team for splash campaigns. The results of that loading testing gave Ideation confidence about the resources they’d need to ensure the app was responsive during spiking traffic. Since Ideation uses Related Noise to scrape social media APIs, the more social networks and hastags the platform listened to for the campaign, the more traffic it would need to be able to handle. The Engine Yard environment not only had to handle all the incoming traffic from users to the Related Noise campaign website and social widgets, but also all the API activity. 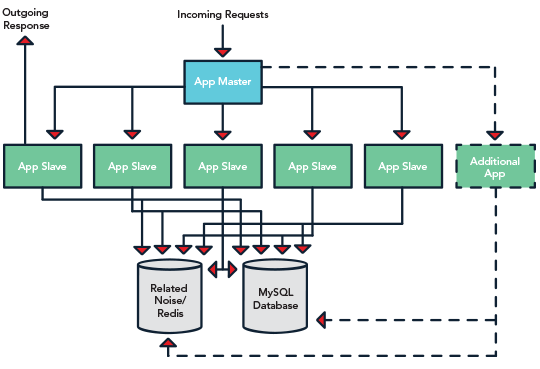 Scaling Up for Production

The Engine Yard support team helped scale up the database just prior to the event. They left the old database in place, so scaling down when the spike was over would be a snap. By having an environment large enough to handle the largest load spikes, the Ideation team didn't have to worry about response times or uptime, and it gave them the ability to focus on the data coming from Related Noise. According to Robert, it was the most exhilarating Super Bowl game he has ever watched, because on game day the level of engagement with the app was incredible.

Although Engine Yard allows users to open "event" support tickets where they can detail big events like this one, Ideation opted to go with a few tickets before the launch to make sure the system was totally up to speed. The Engine Yard support team was integral to spinning up the Related Noise utility instance. They also helped with advanced penetration testing in preparation for the campaign that required some environment changes. By taking the DevOps load off the Ideation development team, Engine Yard support allowed Ideation to focus on the application and its real-world integration.

Over 39,000 photos were tweeted and displayed on the Times Square billboards.

The Engine Yard platform performed very well and was a great choice for the Ideation team. Although Robert has over 20 developers on staff, he only needs to allocate a few of them to a project, even for something as large as a Super Bowl campaign. Provisioning and configuring an instance for a Ruby on Rails application is time-consuming, and it isn’t productive to have a developer doing it. Robert recognized early that he needed to offload these DevOps tasks to keep his team focused on developing innovative apps.

“Ever since we first launched Ideation, Engine Yard has been our cloud platform. Not having to worry about DevOps has allowed us to focus on design and development and to grow quickly. We know that when we walk into any project, the ops side is covered. All we need to worry about is designing an amazing user experience and building it to make sure it will scale. Then, we just click deploy, and it’s up and running on Engine Yard. This has saved us no less than 80 hours per month of DevOps work,” said Robert.

The campaign was an instant hit. Participation spiked on Super Bowl Sunday when Axe owned the promoted trend on Twitter, peaking when the #KissForPeace hashtag was broadcast during the Super Bowl commercial. It was one of the most successful campaigns ever run on the Twitter platform and performed 6x better than projected, based on past KPIs.

Even celebrities were tweeting pictures of themselves kissing with #KissForPeace. It was such a big deal in fact, that other major companies were trying to get in on the action by tweeting their own message with #KissForPeace. “You know you've got something great when other brands are trying to piggyback on the traffic and reach of a campaign by joining the conversation,” said Robert.

The Kiss For Peace campaign was a huge success and performed well on Engine Yard because of the scalability and reliability of the platform. Ideation relied on the Engine Yard support team for their experience in testing, optimizing and deploying Ruby on Rails apps in the cloud, so they could focus on building and running a successful interactive campaign.

“Ever since we first launched Ideation, Engine Yard has been our cloud platform. Not having to worry about DevOps has allowed us to focus on design and development and to grow quickly. We know that when we walk into any project, the ops side is covered. All we need to worry about is designing an amazing user experience and building it to make sure it will scale. Then, we just click deploy, and it’s up and running on Engine Yard. This has saved us no less than 80 hours per month of DevOps work.” - Robert Dilio, CEO, Ideation

Scalable, reliable platform processed more than 82,000 mentions of #KissForPeace over a 2-week period, which created more than 2.2 billion potential impressions.